Player evaluation: Scott Rolen (and the other 3rd basemen) 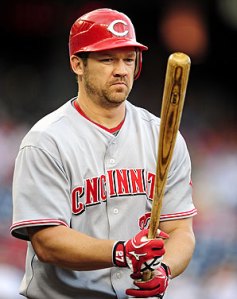 Scott Rolen will turn 37 less than a week into the season, but he can still produce.

Scott Rolen’s numbers from last season (.242/.279/.397) are not very encouraging. But what is even less encouraging is his number of games played (65). At age 36, it’s not a big surprise that Rolen’s health is a big determining factor in his success.

While his hitting suffered last season, his fielding did not (in my opinion). He didn’t win a Gold Glove like he did in 2010, but he was voted an All Star and he did still make the occasional spectacular play.

Juan Francisco seems to be the guy we’ll see at 3rd base on Rolen’s days off. Dusty seems to like him and so do a good proportion of fans. While Francisco isn’t as quick as Rolen in the field, he has a great arm to make up for it. Last year in 31 games played, Francisco hit .258/.289/.452.

Last season, we saw Todd Frazier in the lineup more often than Francisco. Frazier is truly at utility guy; he played 41 games at third, left, second, short and first. Frazier hit .232/.289/.438 and can play the field well enough. What makes Frazier stand out in my mind is that he can actually run the bases.

While each guy has their advantages (Rolen with fielding, Francisco with power and Frazier with speed), I think the Reds would be in a great position if they could squeeze 100 games out of Rolen. But that’s thinking optimistically.

One thought on “Player evaluation: Scott Rolen (and the other 3rd basemen)”