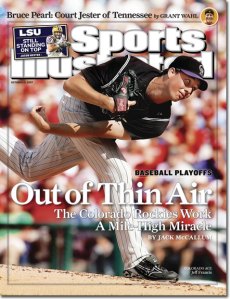 Francis on the cover of Sports Illustrated during that outstanding 2007 Rockies run.

The Reds reportedly agreed to terms with left-handed pitcher Jeff Francis yesterday. Francis, 31, posted a 4.82 ERA and 6-16 record in 31 games with the Royals last season and will start in the Reds minor league system. With the starting rotation set, the Reds picked up Francis as insurance in case of injury (kind of like a Dontrelle Willis thing last season). Francis has never had an ERA below 4.00 but he was a 17-game winner in 2007 with the Rockies so there is some upside.