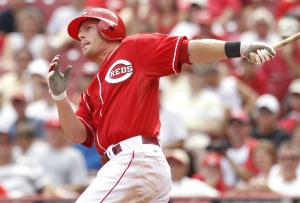 In 11 games last season, shortstop Zack Cozart looked pretty good. While he’s great defensively, Paul Janish was not getting the job done at the plate to say the least. Cozart got the call and hit .324/.324/.486 in 37 at bats.

Then Cozart hyperextended his left (non-throwing) elbow and the Reds were back with Paul Janish. Dusty Baker and Walt Jocketty made it very clear that Cozart would be the starter from Day 1 this season.

Cozart has enormous potential. He hit well in his brief stint last season and his defense was good. I don’t expect him to hit .324 for the whole season (or even .300) but I’m very confident that he’ll fare better than Janish’s .214 average.

I think that moving from Janish to Cozart as the regular is the biggest upgrade the Reds have made thus far.