The Reds are in first, and other notes 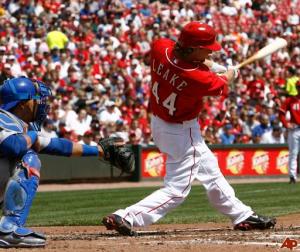 Well, it has been a while since I last posted so I’ll give an update on what I think happened over the past month to propel the Reds into first place.

At this point, the Reds are 1.5 games up on the Cardinals. The Cardinals are certainly hurting with key players like Chris Carpenter and Lance Berkman on the DL but they’re managing to win games. If/when they get back to full health, the Cards will certainly be a force to be reckoned with, but that’s a ways down the road.

The biggest improvement I’ve seen from the Reds is that they seem to be relaxing more. On the mound, in the batter’s box and in the bullpen, everyone seems more patient and is letting the game come to them. In the beginning of the season, pitchers seemed to only want to strike guys out and batters only wanted to hit doubles and homers. They’ve still had some awful games offensively, but that will probably always happen. What the team needs to avoid is scoring 1 run a game for a week straight (which is what it felt like in the beginning of the season).

The biggest problem facing the team right now is their bench. Let me quickly break down the statistics of the most frequent pinch hitters.

Based on the total row, you might want to say it’s not that bad. And you’re rich, a .283 average for pinch hitters is decent (I’d like to see it at around 1.000 but that’d be tough). What is bad is the RBI total … SEVEN RBI from seven players. Willie Harris (now at AAA) and Mike Costanzo are the usual suspect to pinch hit and they’re batting a whopping .048.  At this rate, the pair will acquire 3.24 hits in PH appearances this season. That’s right, 3 hits. In an entire season. Between two guys.

Since pinch hitters usually replace starting pitchers at the plate, let’s take a gander at those numbers.

Not a whole lot worse. The batting average is definitely worse, but they’re averaging more RBI, even though PH are usually used with runners on. Am I saying all the pinch hitters should be sent to AAA and young guys be brought up? No, but maybe Mike Leake should be used instead of Mike Costanzo every once in a while. I’d bet that Leake is faster, too.

When it all comes down to it, the Reds bench is a problem. But if I had to choose a problem to have just 50 games into the season, the bench is an awfully fixable one.

Costanzo down, Negron up »
« The worst season of Scott Rolen’s career