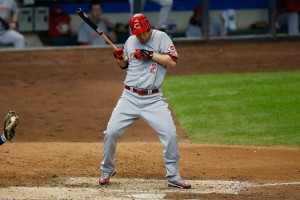 There is a leadoff problem. Zack Cozart has lead off most of this season and has not produced from the spot. Take note that I write “produced” not “hit.” He’s hitting .249/.295/.405. The fact that his on base percentage is only 46 points higher than his average means that when he gets on, it’s because he got a hit. What is troubling to me is the number of pitches he sees. Cozart sees an average of 3.73 pitches per plate appearance. Votto, a player with extraordinary plate discipline, sees 4.19 pitches per PA (the highest of his career). The numbers aren’t that far off and by no means do I expect Cozart to be as good as Votto. But another way, Votto has seen nearly 200 more pitches this season than Cozart.

I understand the philosophy to “swing at the first good pitch” but if pitchers start to figure out that Cozart swings at anything early in the count and close (which they have), he’ll keep getting junk. His batting average and on base percentage will only go down.